PowerPhotos works with the built-in Photos app on your Mac, providing an array of tools to help you get your photo collection in order. Find and eliminate duplicate photos, split up your library into smaller ones, merge libraries together, open libraries in separate windows, export photos/albums, and more. 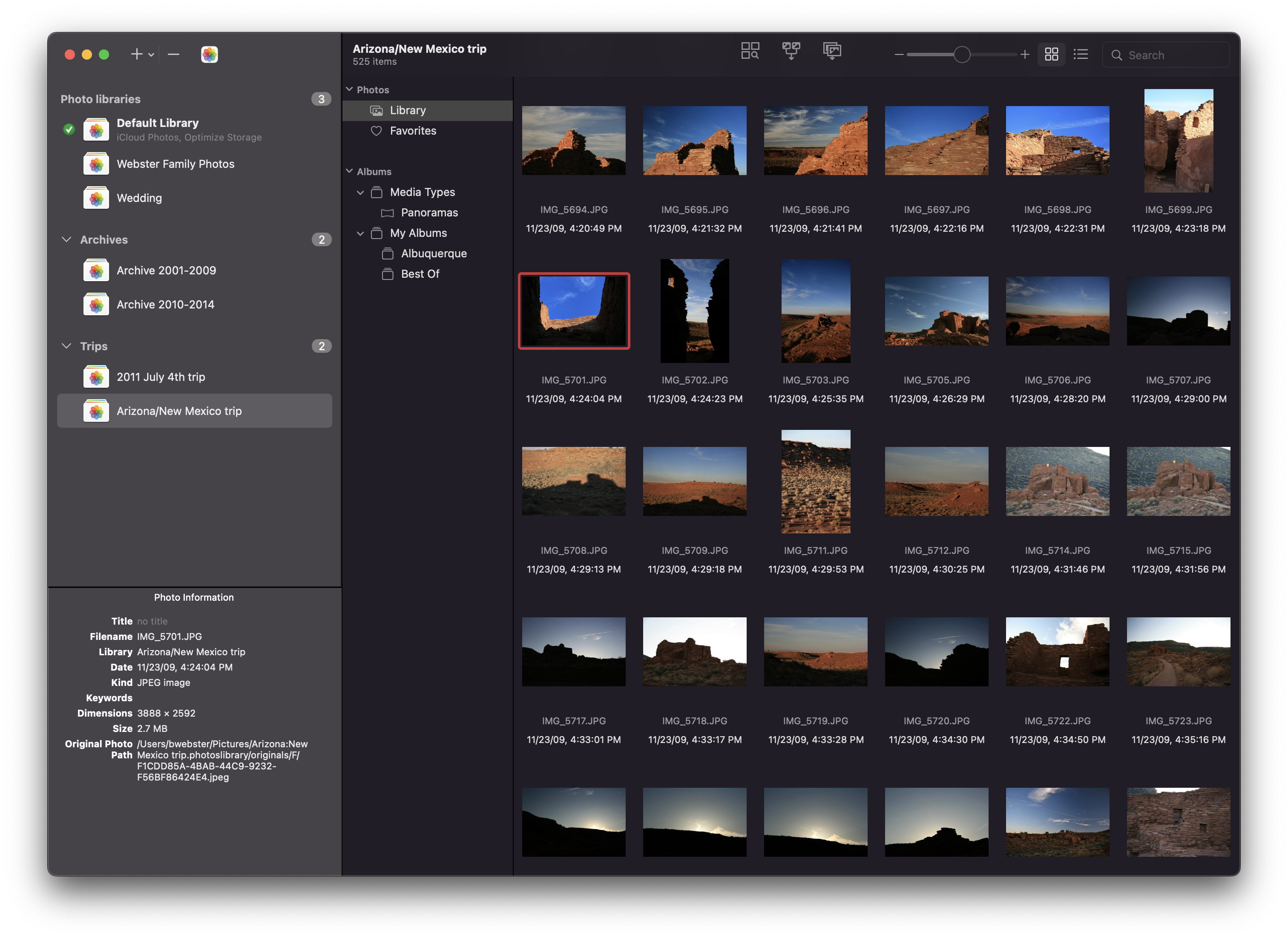 Instead of being limited to putting all your photos in a single library, PowerPhotos can work with multiple Photos libraries, giving you many more options for how to organize your ever growing photo collection. 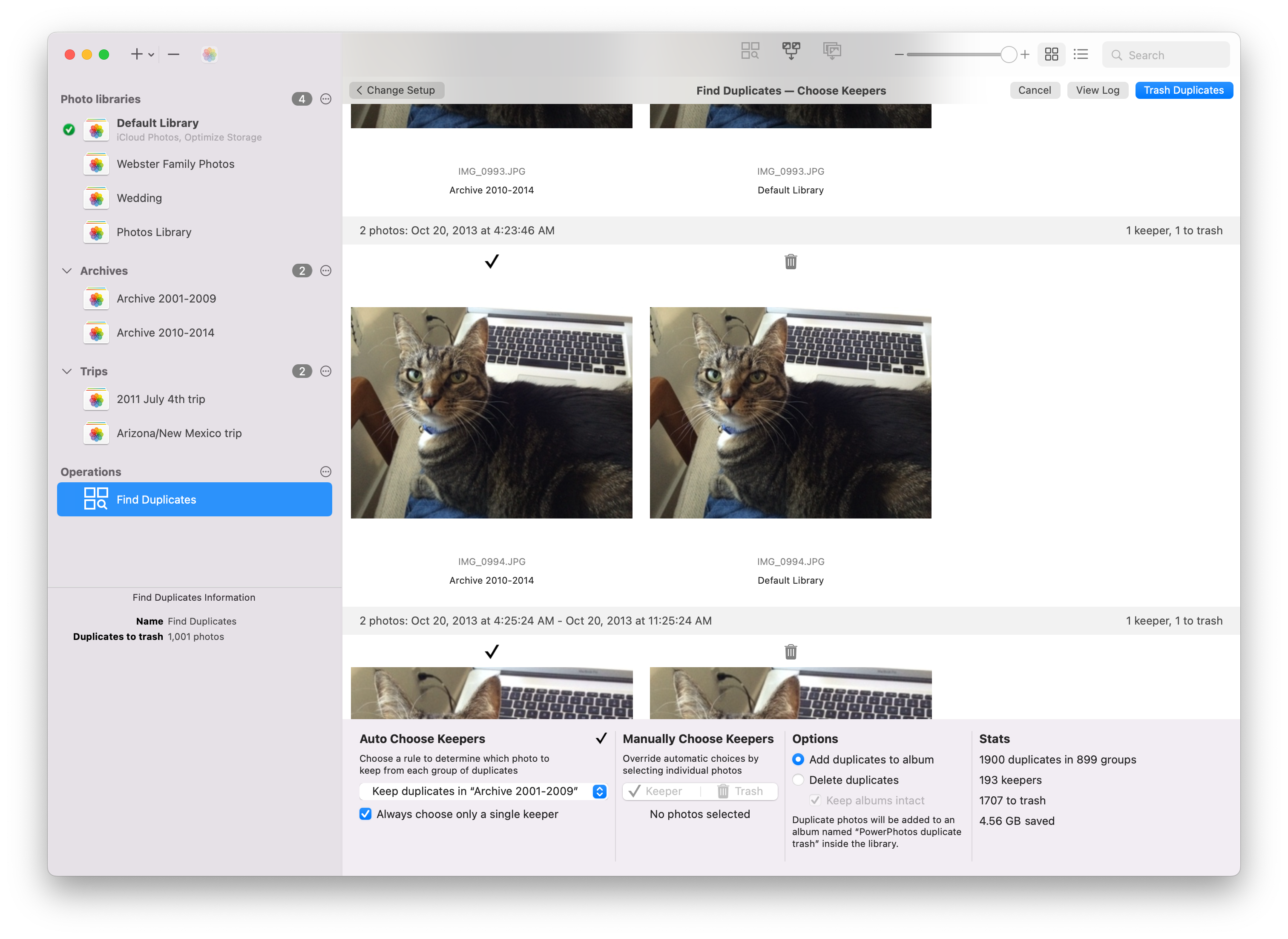 It’s easy to have multiple copies of the same photo creep into your photo collection over time. Use PowerPhotos to find duplicate photos in one or more libraries, view them side by side, and delete the extra copies to save space on your drive and in iCloud. 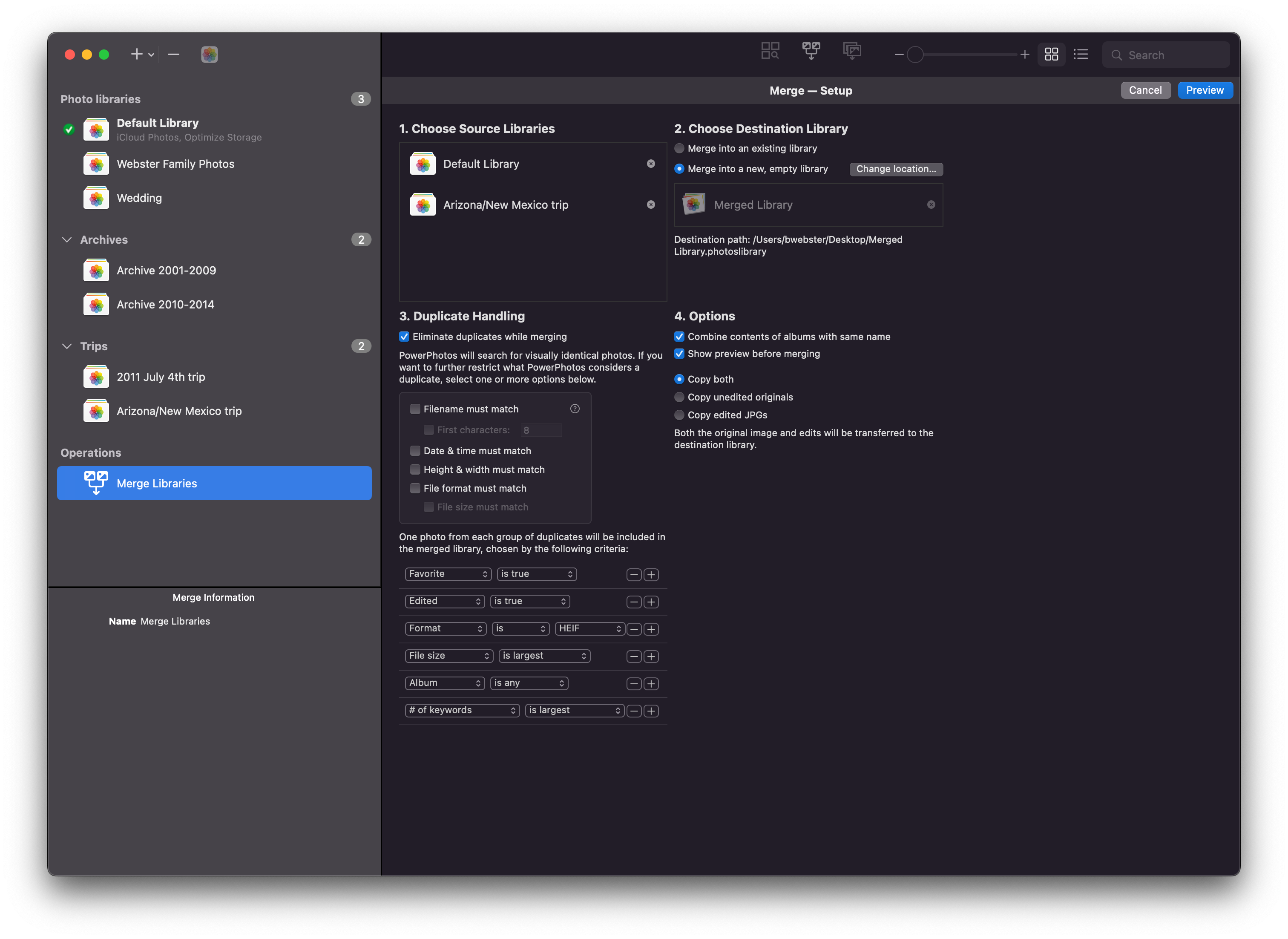 Got a whole bunch of libraries you want to consolidate into one? PowerPhotos lets you merge your libraries together while weeding out duplicate photos in the process and keeping albums and photo edits/metadata intact. You will be shown a preview of what your merged library will look like before any modifications are done, to ensure your merged library looks how you want.

Copy photos and their metadata 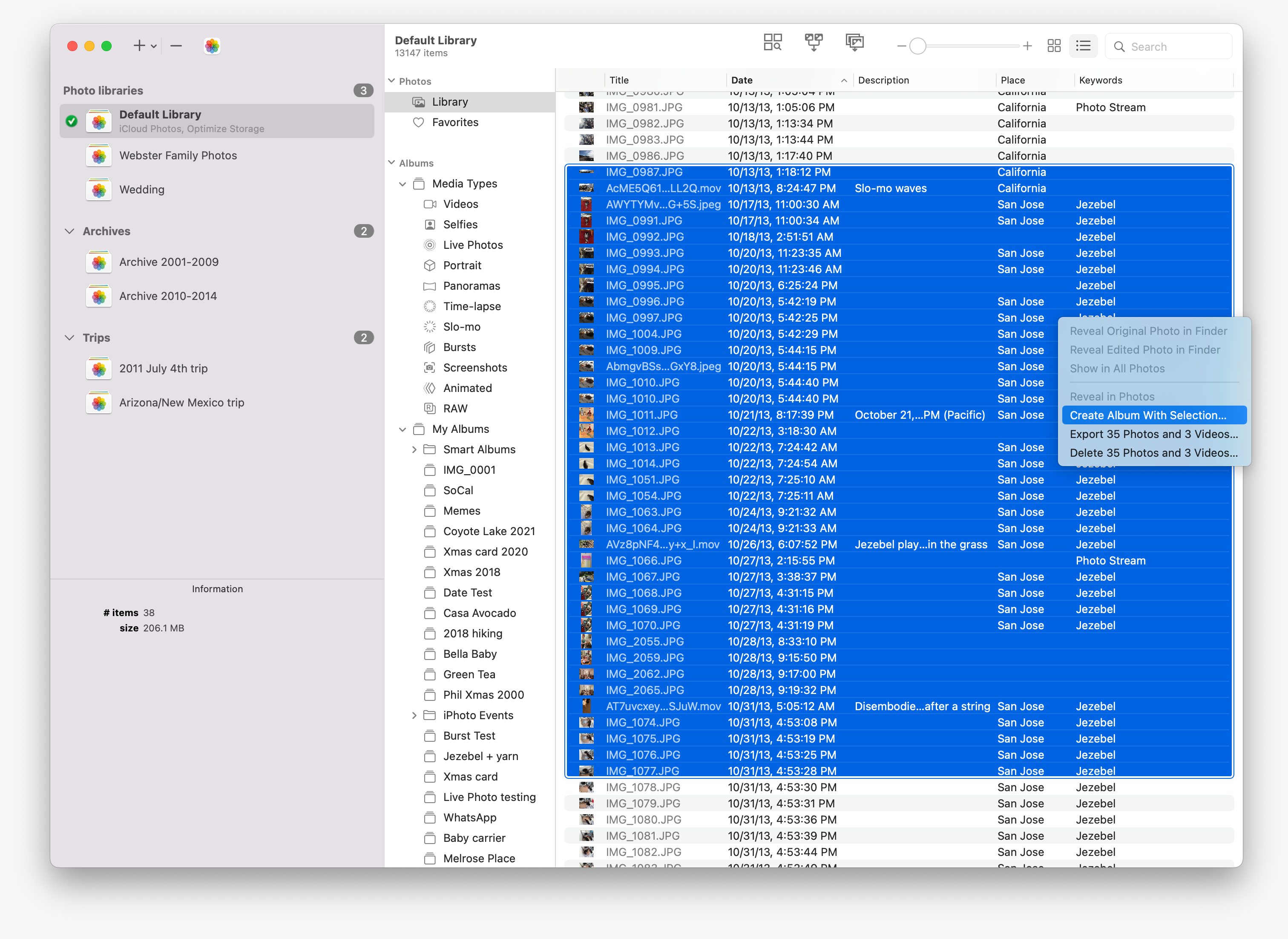 You can split your library by copying albums and photos with a simple drag and drop. PowerPhotos will take care of copying the photos and retaining their metadata, including keywords, descriptions, titles, dates, and favorite status. Read more about what PowerPhotos can copy. 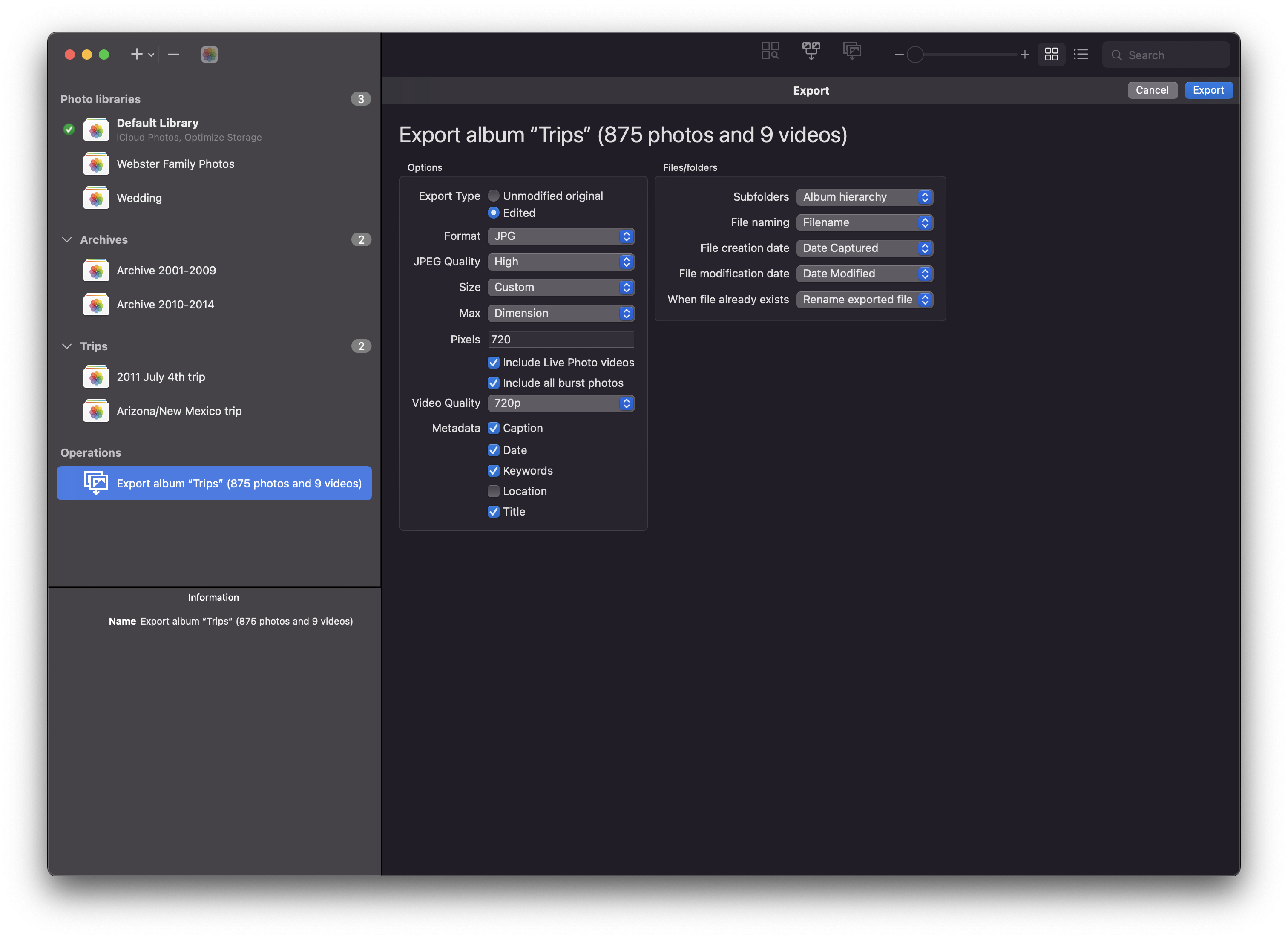 PowerPhotos 2.0 has a new export feature that offers more options not found in Photos built-in exporting capabilities. In addition to standard features such as including metadata in the exported photos and videos and being able to export in different formats and sizes, PowerPhotos also allows you to export albums from your library as a hierarchy of folders in the Finder that mimic your album hierarchy. You can also set the Finder modification/creation dates to match the photo EXIF date, customize file naming, include videos from Live Photos, and more. 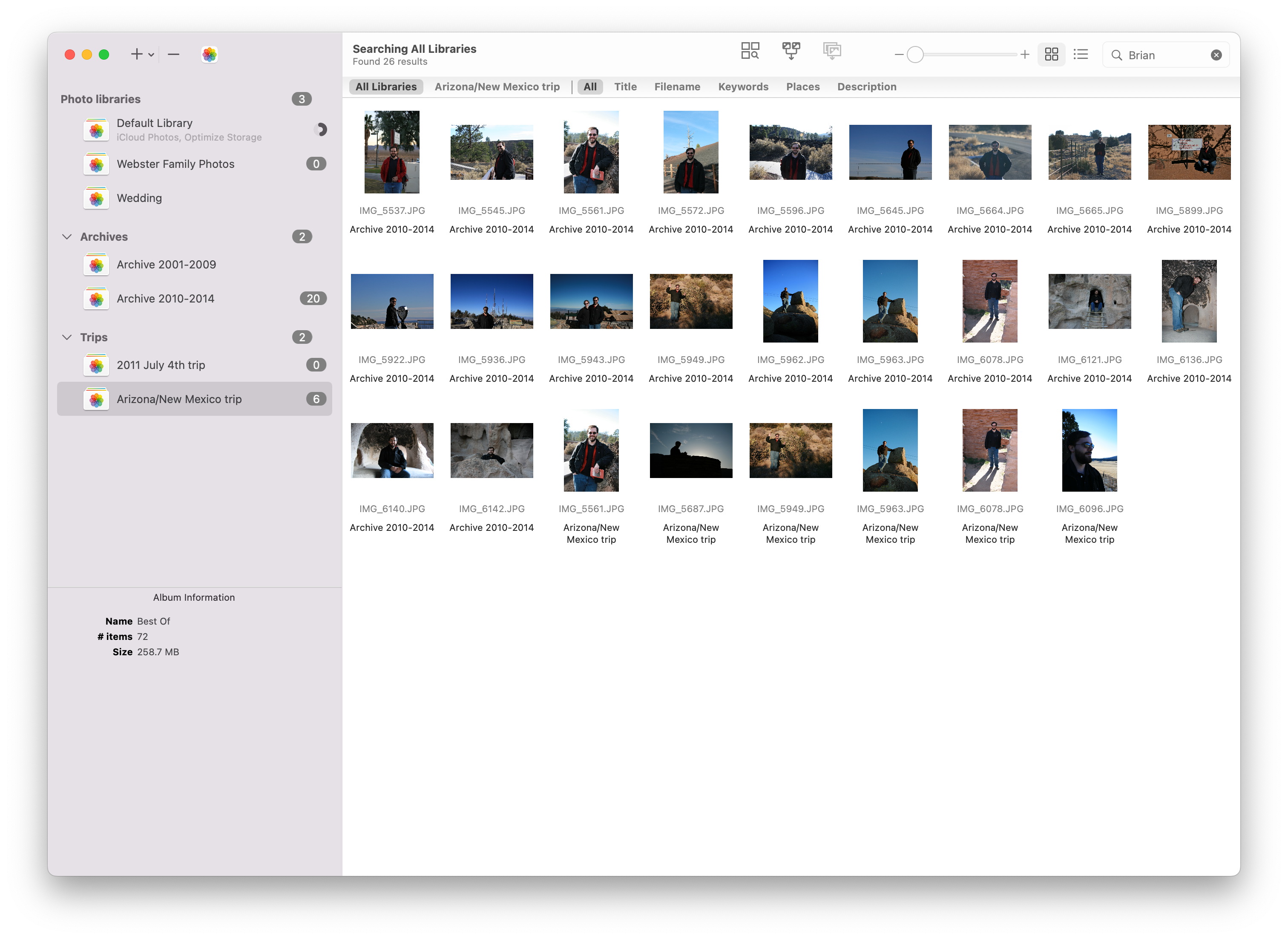 Use PowerPhotos’ image browser to quickly view your photos without having to open Photos itself. View detailed photo information using List View, and search for photos across all your libraries at once. You can also open libraries in separate windows to easily compare them or copy photos and albums back and forth.